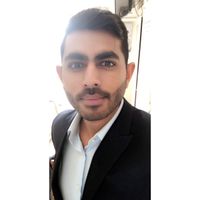 The definition of equivalence in the EU Financial Regulation resonates with recognition of the legal status of a third country. The regulatory framework is based on the same fundamentals as that of EU, leading to the same degree of legislation, protecting tax payers and maintaining financial stability.

The UK will become a third party after Brexit. In the absence of a transitional agreement, its entry to EU markets would be conditional on satisfying the criterion of ' regulation and supervision equivalence' as provided for in several EU regulations. While the United Kingdom regulations would be identical in substance, the lack of a substantive equivalence judgment by the Commission may constitute a significant obstacle to the continued offer of financial services by the United Kingdom on the EU markets. The effects can be very detrimental. If no transitional steps are taken, the United Kingdom will lose the advantage of the “the treaty freedoms”, in this case the freedom of establishment and of provision of services over the entire time to the EU.

The equivalence criterion was initially designed as an investment security mechanism to ensure that institutional investors in the EU are covered in the same way as they appreciate their connections with EU service providers. As a result, third-party service providers are subject to conditions that are largely similar to those applied in the host country. At the same time, the requirement has the undeniable effect of restricting access to EU investors and financial operators by service providers from the rest of the world, without isolating EU markets from innovations outside the EU. The commission has shared a more political opinion on equivalence i.e. equivalence is a mechanism for more effective operation leading to convergence of financial markets and therefore, reducing the burden of regulation and enforcement. It will lead to less friction in cross-border capital markets and encourage market integration.

The provisions on equivalence can be found in the three primary areas of financial regulation i.e. banking, insurance, securities & markets.

An overview of the cases where the Commission has already made equivalence decisions shows that, in certain situations, equivalence with the United Kingdom could quickly be accepted: this will be the case with regard to the equivalence of financial information (accounting standards; prospectus and transparency), the position of the auditors, the regime of the credit rating agencies, the acknowledgment of third country roles in the financial position of the bank or of insurance firms.

In all these regions, the UK regulatory system will remain relatively similar – in some situations also super equivalent – to the EU regime. The UK would have the most comparable structure for any country in the world to the EU.

The EU's Financial Instruments Directive (MIFID II) and its associated Legislation have suggested the establishment of a market access mechanism for certain investment companies that will enable them to offer certain market services from outside the EU, such as investment advice and support for the design, acquisition and sale of shares - until their home market has been assessed as equal by the EU. Since the transition period ended (31 December 2020), the European Securities & Markets authority (ESMA) has ‘switched off’ the FCA’s access to its MIFID systems. To prepare for this, and provide operational continuity to UK firms, the FCA have built equivalent FCA systems in the UK, called FCA FIRDS and FCA FITRS to align with 2 key EU systems are ESMA FIRDS, which provides reference data for all MiFID instruments that are Traded on a Trading Venue (TOTV) in the EU, and ESMA FITRS, which publishes reference data, liquidity, waiver thresholds and quantitative data to help firms assess their trade reporting.

The UK has played a crucial role in the design of the EU Financial Services Legislation. The Government is committed to ensuring prudential soundness and other major regulatory results, such as consumer safety and proportionality. Therefore, the EU will also adapt its deployment strategy to ensure that it is best tailored to the UK market outside the EU. Decision for some of the schemes for UK under equivalence is given below: 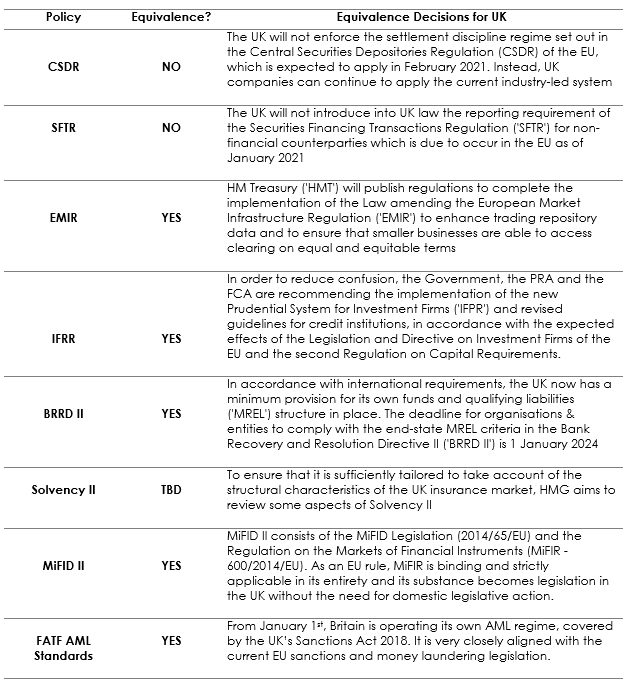 What impact will Brexit have on the UK’s financial services trade with the rest of the world?

As far as direct taxes are concerned, much of the tax policy lies beyond the competence of the EU. However, there would be an impact, for example, that the UK's status as a holding company location could be impacted by the UK losing the privileges of the EU Parent-Subsidiary and Interest and Dividends Directives. For several financial services firms-which work digitally and employ a large number of people-data and migration agreements would be as relevant as the specifics of the financial services agreements themselves.

Equivalence is not just about access; it's about the cost of doing business. Failure to make equivalence judgments will raise the cost of doing business for financial services companies and customers they represent. This will have an impact on the market performance and global competition of financial services firms operating in both the EU and the UK.

The sovereignty for both the EU and the UK is, of course, a double-edged sword, and there is also no relation to the structural form of 'enhanced' equivalence that the UK has asked in the negotiations. Essentially, to try and improve the assurance and certainty concerning the equivalence decisions will have for financial services firms working between the UK and EU Member States post-Brexit. The EU definition of regulatory 'equivalence' is regulated by individual directives which requires some financial services companies from non-EU countries to offer services to EU clients such that they follow a minimum set of regulatory requirements. Only time will tell whether UK firms are in adherence with the ‘minimum’.

As previously explored in my last article – a ‘hard’ Brexit seems unlikely given the UK regulatory push for equivalency to EU financial regulation. We are already seeing implementation of a new set of policies in the UK which have very little, if any, changes to the previous regime. In this case, it seems as though the transition period for UK firms may be a ‘soft’ one. 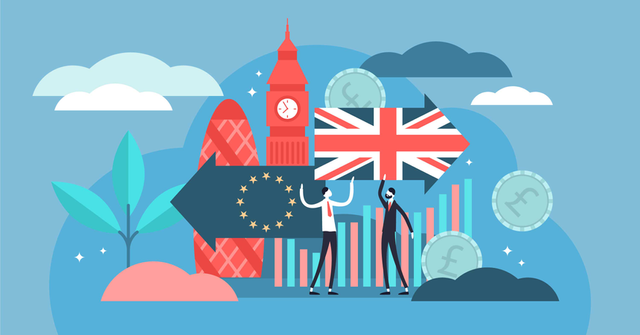 Preparing for a hybrid or 'phygital' workplace
Geoffrey Doran