The ancient Greek had a concept of arête, which meant outstanding fitness for purpose. Extending this concept, excellence is defined as a talent or quality that is unusually good and so surpasses ordinary standards. A CoE is a team, a shared facility or an entity that provides leadership, best practices, research, support and/or training for a particular function within the organisation. Thus, it is implied that having a CoE would assure outstanding performance in that focus area for that organisation.

The term ‘CoE’ or ‘excellence’ itself is frequently criticised as a buzzword that tries to convey a good impression without imparting any concrete information. Hence it is important to construct and operate a CoE that is always aligned with the vision of your organisation and your organisation’s operational model. It is equally important to measure its performance through well-defined KPIs that are derived from the overall performance KPIs for your organisation. Without this alignment and measures in place, a CoE can quickly become either an ineffective appendage or worse still, a draconian white elephant that no one wants to own and everyone hates, but cannot be gotten rid of!

There are some key facets of a CoE which, if managed well, help to avoid these pitfalls and stay on course. This article is focussed on Salesforce CoE, but other technology CoEs could be modelled using similar principles of adhocracy. Adhocracy is characterized by an adaptive, creative and flexible integrative behavior based on non-permanence and spontaneity. It is believed that these characteristics allow adhocracy to respond faster than traditional bureaucratic organizations while being more open to new ideas.

Get speed to market

The Head of Salesforce CoE in a large enterprise once told me that his ask from his team was to have #5-a-day! Unfortunately, that particular CoE had bottlenecks in its delivery pipeline and was nowhere near realising its target.  The answer to such prayers of speed is automation and more automation! Identify essential tasks and activities that are repetitive and automate them. Automated DevOps with Continuous Integration and Continuous Deployment forms a cornerstone of the overall CoE. Leverage specialized automated testing tools and processes to automate quality assurance tasks. It is feasible to introduce automation even to manage subjective processes such as impact assessment of business requirements. Implementing automation accelerates delivery by clearing bottlenecks and freeing up teams to focus on business functionality. It also ensures that the best practices are followed and standards maintained consistently. A word of caution… whilst designing and implementing an automated process, it is important to follow the maturity journey for that process and also ensure that it is providing an acceptable ROI.

Cater for software that never ends

We all like to talk in terms of ‘As Is’ and ‘To Be/Target/End State’ architectures and solutions. The reality is that we never reach the end! Decoupled architecture and solution implementations that pay down technical debt are important to facilitate continuously changing systems. Innovation is another cornerstone of an effective CoE. It embeds innovation processes that take an idea, prototype it and introduce it in the mainstream software to be further evolved with time.

Governance is all about standardisation and authority. A CoE is often associated with bureaucratic and complicated governance that seems to hinder and, at times, deny progress. There is an element of truth here as CoE teams often hide behind lengthy, boilerplate lists of Do’s and Don’ts. This ignorance has a lot to do with a lack of pragmatism and effective communication from the CoE teams. It is important to design and implement a lean governance model that is tailored for the specific needs of the organisation. If the CoE teams evangelise benefits of good governance, they can convert a community of ‘Law Abiding Citizens’ to that of ‘Good Citizens’.

For many years, people have watched huge flocks of starlings gather and ‘dance’ in astonishing formations. It is called ‘murmuration’. The starlings seem to react to emerging threats and risks as a single entity, moving in beautiful patterns, often confusing the attacking falcon, or whatever the threat may be. The result is that the whole flock is much safer. It can be observed that a change in behaviour of one bird affects and is affected by the behaviour of the whole group. This means it does not matter how big the flock is, they react in almost perfect harmony. There are lessons to be learned here for the entire organisation in order to be able to adopt change quickly. I would expect a multi-disciplinary CoE team comprising of business, technology and management representatives to be a murmuration of experts and provide leadership. Together, we are stronger.

Initially, when you commence your pursuit of excellence, there is likely to be resistance and scepticism from within the organisation. The trick is not to fight such sentiments, but to turn around opinions such as “Why go to CoE?” to “Why NOT go to CoE?” After all, as Aristotle said - “We are what we repeatedly do. Excellence, then, is not an act, but a habit.” 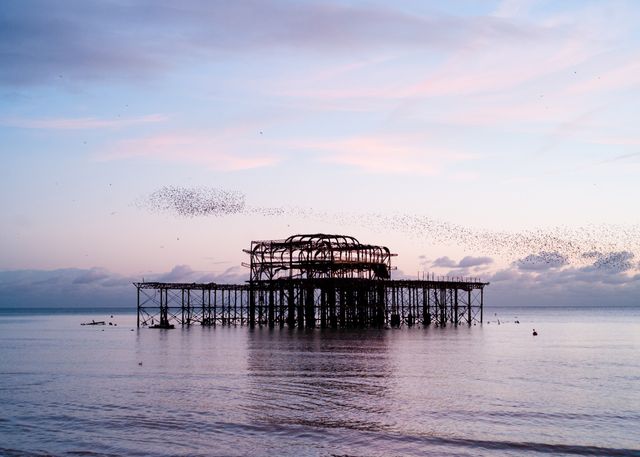