In my last article about GDP of EU as a percentage of world GDP, I was looking for answers to questions that perhaps should have been answered in the period before the British people were put to the referendum vote. Many people at the time felt that no information was given about the implications of Brexit, apart from a lot of political rhetoric and as we later found out, it included many untruths.

In the interesting but rather worrying article in the Guardian, it seems that people in the known such as Canada's lead negotiator may have answers that perhaps many Brexiteers will not want to hear. In the article it highlights that many of the things that were predicted by the Anti-Brexiters are already happening in a very negative way to the economy, even before Brexit has happened.

Separately the assistant James Chapman who recently worked for David Davis our chief negotiator for Brexin also according to The Guardian said that 'May' 'has taken some absolutist positions on particular issues -' that it has 'hamstrung' David Davis in negotiations with Brussels.

I personally believe that the reality of a Brexit as sold to the people is in direct contradiction to what we need as a country. Britain is one of the leading International countries in areas that are less tangible. These include our attitudes to fairness and equality, to respecting diversity at personal, intellectual, morale and religious levels. Britain as a nation has had a great pedigree at helping create many standards across the world.

The adoption of our language (to in many cases our disadvantage), our laws, our support of human rights and until recently our stance on climate. The truth I believe is that 'fear' and 'racism' have been used as the biggest driver for change. The reality is that the world is being dominated by many super national corporations and less so by governments (in some instances the government is the corporation!). In reality the increase in the different levels of wealth, or 'wealth divide' has grown, and it is easy to blame this on the neighbour you might not understand.

I think the Grenfell Tower inferno has galvanised the nation, across all ethnicities, that a period of constant austerity especially effecting the poor, old, those with disabilities is not acceptable. It has also been recognised that the increased pressure put on our low paid but important support services such as the Health, Fire, Police and local services, can no longer be tolerated.

I personally cannot see that controlling our borders can bring wealth. We rely on people coming in for our job both at technical and at less technical levels. (Around 50% of our UK office are non-UK citizens).

Making our own laws, instead of being part of Europe and ensuring sensible laws were being made from the inside of Brussels is in our interest. The reality is from outside, we will still need to adhere to them... I really do not believe the grass is greener in a post Brexit world.

If we move away from our dominance on the international stage; we will fall into the hands of powerful people who will want to make more money, have a stronger hold of our nation, they will frack our country to death, disrespect our countryside which is part of our legacy as having common rights, build on our Green Belts, not to solve problems but to make money. We can see this across our Nation at present, the government literally stepping over communities across the country and ignoring their rights to keep our Areas of Outstanding Natural Beauty as part of our heritage to our current and future generations. Children of the future will ask why we let this happen.

A Brexit world is our own armageddon effectively creating a slave nation to the wealthy where to be poor will be the norm. In many ways we have seen a practice run of this. It will only get worse not better. I have never believed Brexit will happen, on the basis that it is an emotional not a pragmatic and sensible strategy. It is was concocted by people with massive egos, who at the end of the day ran away from managing it in the realisation that getting what you wish for sometimes is not in your best interest.

Personally I do not think Brexit is in our interest as a nation. I am a dual citizen so will never lose my EC rights, but I fear unless we put the brakes on, at some stage we will suddenly find we are at a bottom of a cliff with no where to go!

(This article is the personal opinion of the author and in does not represent the believes of the company, parent or sister companies of the Group)

It took the Canadians eight years to secure an EU-Canada free trade agreement, but even Canada’s lead trade negotiator, Jason Langrish, has warned that no mutually beneficial deal can be reached. Trade already makes up 65% of our GDP. There are few more open trading economies than the UK. We are the third highest recipient of foreign direct investment in the ​world, and the highest recipient of foreign direct investment in the EU. To leave the EU would be to leave 50% of our trade – 45% of our exports and 55% of our imports. We are also negotiating against all the odds. We are one country against 27. We are 65 million whereas the rest number 500 million. We are up against the European commission, the European parliament and the European council, and we have a weak minority government. 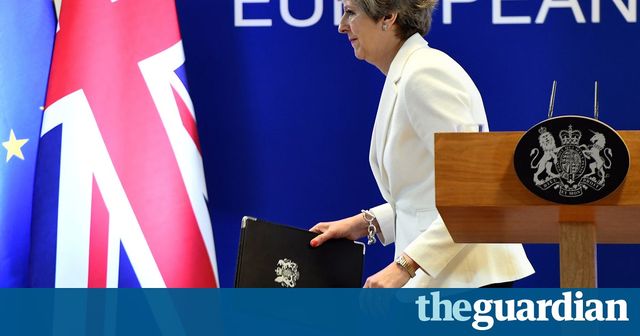 What if the will of the people is now for a second referendum on Brexit? | Karan Bilimoria https://t.co/fJkVlHtrCU

What if the will of the people is now for a second referendum on Brexit?https://t.co/9pn3S1Hh1B

Good to see Chairman of Cobra Beer Karan Bilimoria backing our call for a referendum on final Brexit dealhttps://t.co/rEX9RxqcN5

Here is James Chapman, who worked at the heart of the Brexit dept, explaining how Theresa May "absolutist" stances making Brexit harder pic.twitter.com/bPhr1IdHEN

'No one better for Brexit talks' Ex aide praises Davis despite claims his hands are tied https://t.co/b9ZLEWvOqk